A pair of Zammara smaragdina

A pair of Zammara smaragdina from the collection of Richard Newfrock.

Zammara brevis (Distant, 1905) is a cicada found in Columbia.

It was formerly known as Orellana brevis, as you can see from the image below. The Zammara and Orellana genera are very similar — both belong to the tribe Zammarini, both share pronounced pronotal collars and often green coloring.

The image says Orellana brevis, but the newest name of this cicada is Zammara brevis.

Characters. — Head (including eyes) about as wide as base of mesonotum, ocelli farther removed from eyes than from each other, eyes prominent but scarcely projecting beyond the anterior pronotal angles, vertex strongly depressed before base of front; face longer than broad, narrowly sulcate; pronotum shorter than mesonotum, the lateral margins angularly ampliate; mesonotum about as long as head and pronotum together; metanotum exposed; abdomen short; tympanal coverings outwardly complete, the orifices very widely exposed internally; opercula short, oblique; rostrum reaching or slightly passing the posterior coxae; tegmina usually three times as long as broad, apical areas eight; wings with six apical areas.

Zammara intricata Walker, 1850 (in case you’re wondering “Walker” is the person who first described this cicada, and 1850 was the year he described it) is another beautiful cicada belonging to the Zammara genus. Zammara cicadas are known for their prominent pronotal collars that inspire thoughts of Dracula the vampire, their brilliant green to turquoise colors, and infuscation (the dark areas) on their wings. Zammara intricata has a lot of infuscation in their wings, even for a Zammara. Intricata means “complex”, which might be a reference to the complexity of the infuscation.

It is found in Puerto Rico.

Characters. — Head (including eyes) about as wide as base of mesonotum, ocelli farther removed from eyes than from each other, eyes prominent but scarcely projecting beyond the anterior pronotal angles, vertex strongly depressed before base of front; face longer than broad, narrowly sulcate; pronotum shorter than mesonotum, the lateral margins angularly ampliate; mesonotum about as long as head and pronotum together; metanotum exposed; abdomen short; tympanal coverings outwardly complete, the orifices very widely exposed internall} – ; opercula short, oblique; rostrum reaching or slightly passing the posterior coxae; tegmina usually three times as long as broad, apical areas eight; wings with six apical areas.

Most of the information on this website is focused on cicadas of the U.S.A. and Canada. There are plenty of cicadas south of the U.S., of course. Recently we started getting identification (ID) requests for cicadas of Mexico, and with the help of experts (Geert Goemans and Allen Sanborn) and a paper from the early 20th century, I was able to ID them all.

A large number of the IDs were for cicadas with pronounced pronotal collars. Many of these look like the same species, but they’re not. Many of these species are found from Mexico, throughout Central America down to South America.

On this page are six collared cicadas that exist in Mexico, Central America and South America. Illustrations come from Insecta. Rhynchota. Hemiptera-Homoptera. Vol. I by W. L. Distant and The Rev Canon W. W. Fowler, F.L.S. I updated the names to their current names (the source is about 100 years behind the times, expectedly so). Note that the illustrations from this document are of dead specimens, so the colors were faded at the time they were illustrated.

Formerly Odopoea montezuma. This cicada is actually tourquois to pale blue when alive. Red eyes. No infuscation (coloration) in the wings. Link to original illustration..

Green with black infuscation in the wings.

Here is a photo by Andreas Key (taken in Ecuador): 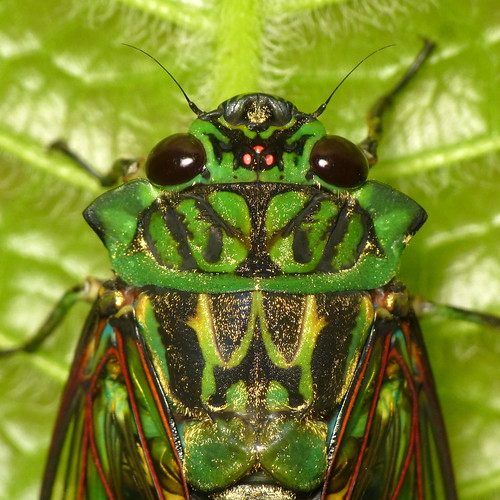 Green with remarkable black infuscation in the wings.

The NCSU Libraries Rare and Unique Digital Collections website recently reminded the us of artist Eugene Alain (E.A.) Seguy’s insect illustrations. Seguy created these illustrations in the 1920’s, and as you might imagine, some of the cicada names cited in the notes for these illustrations have changed. Names typically change when cicadas are reclassified due to discoveries about their biology, or when we realize that someone else had actually named them earlier than the namer currently given credit.

Just in time for Halloween… the Zammara a genus of cicadas with a collar like Dracula!

Andreas Kay has been posting photos of the insects of Ecuador on Flickr for around a year now. He’s posted many excellent cicada photos, particularly, photos of Zammara. They are among the most visually interesting cicadas. How to learn more about cicadas, by searching for cicada researchers

Just about anything and everything ends up on the web these days, including research papers written by cicada researchers. Many of these papers are easily downloaded from the web, and once downloaded you can read them and expand your knowledge about cicadas.

Some interesting papers I found include:

Checklist of the cicadas (Insecta: Hemiptera: Cicadidae) of Paraguay including new records for six species (Sanborn, Allen F., 2011). This paper includes a long list of cicada species, which I used to look for images of cicadas on Flickr.com.

The new records increase the known cicada diversity 37.5% bringing the total number of cicada species reported in Paraguay to 22 species in 12 genera representing five tribes and three subfamilies of the family Cicadidae. There are currently no known endemic species.

ABSTRACT
Analysis of museum specimens has added to the cicada fauna of Belize, El Salvador, Guate- mala, and Honduras. Information on the cicada fauna reported in the literature as well as the first records of cicada species to the fauna are reported here to provide a more accurate un- derstanding of cicada diversity in each country and the region. The new records represent an increase of 75, 14, 110, and 320%, respectively, to the cicada faunal diversity of each country.
Key Words: cicadas, biodiversity, Central America

If you use my Google formula, you can find these papers too.

The The Current Status of Cicada Taxonomy on a Region-by-Region Basis page on Cicada Central is a good resource for learning about other cicada researchers.