The Diemeniana euronotiana can be found in eastern NSW, south-eastern Victoria, and Tasmania. They are most common from late November to January1. 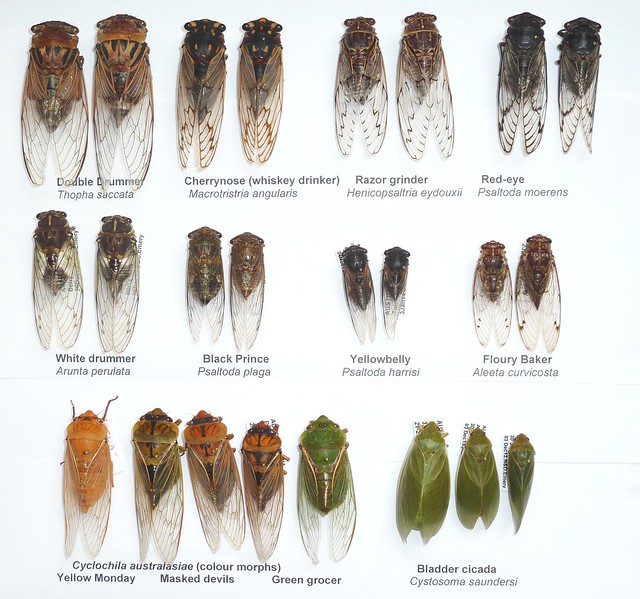 END_OF_DOCUMENT_TOKEN_TO_BE_REPLACED

Here are the particulars:

Lindsay Popple announced on Twitter that two new species of Clinopsalta cicadas have been described.

Abstract from the journal article:

Two new species are described in the genus Clinopsalta Moulds. Clinopsalta autumna sp. nov. exhibits a warm temperate distribution from south-east Queensland south to Goulburn and Nerriga in eastern New South Wales. Clinopsalta semilunata sp. nov. has a patchy distribution in southern Queensland from Binjour Plateau west to near Miles, south to Yelarbon State Forest and Durikai State Forest, both near Inglewood. In addition to the descriptions of these new species, further distribution records are provided for C. adelaida (Ashton), which extend its distribution from south-eastern South Australia and northern Victoria to inland central and northern New South Wales. The species of Clinopsalta are small—medium sized cicadas (< 20 mm body length) with distinctive calling songs of an intermediate frequency (c. 6 to 18 kHz). The temporal structures of the calling songs follow a similar pattern in each species, comprising an introductory rattle followed by a series of clicking phrases. The call is characteristically accompanied with bouts of prominent wing-snapping, except in one species (C. semilunata sp. nov.).

According to Nathan Emery on Twitter, four new species of cicadas belonging to the genus Yoyetta have been described:

See this paper for more information:

It’s Winter in Australia but I have two cool pieces of Australian Cicada news for you.

First, Australian cicada expert and researcher Lindsay Popple has created a new website about the cicadas of Australia.

Also, he’s been placing cicada songs on SoundCloud as well:

@cicadamania The sounds that will link into my almost completed cicada website have already been uploaded here: https://t.co/yd9bGupveR

Second, Samuel Orr has shared some video of cicadas from Australia and New Zealand on Vimeo. I believe this video will be part of the cicada documentary he is working on.

Australia and New Zealand Cicadas from motionkicker on Vimeo.

@wapogipo88 @cicadamania With Tibicen out in USA and Birrima out in Australia, it will be world #cicadas in stereo! pic.twitter.com/zdFLBAnLOU