Thick orange stripes on the abdomen. Orange between the eye and wing insertion. In the few areas it overlaps with M. tredecim, M. neotredecim sings with a higher pitch. Read more on Cicadas @ UCONN (formerly Magicicada.org). It is similar to the 17-year species M. septendecim.

In a nutshell: These researchers compared the DNA of a variety of cicadas to determine how they are related evolutionarily and how they should be organized in terms of tribes and sub-families.

A molecular phylogeny and a review of family-group classification are presented for 137 species (ca. 125 genera) of the insect family Cicadidae, the true cicadas, plus two species of hairy cicadas (Tettigarctidae) and two outgroup species from Cercopidae. Five genes, two of them mitochondrial, comprise the 4992 base-pair molecular dataset. Maximum-likelihood and Bayesian phylogenetic results are shown, including analyses to address potential base composition bias. Tettigarcta is confirmed as the sister-clade of the Cicadidae and support is found for three subfamilies identified in an earlier morpho- logical cladistic analysis. A set of paraphyletic deep-level clades formed by African genera are together named as Tettigo- myiinae n. stat. Taxonomic reassignments of genera and tribes are made where morphological examination confirms incorrect placements suggested by the molecular tree, and 11 new tribes are defined (Arenopsaltriini n. tribe, Durangonini n. tribe, Katoini n. tribe, Lacetasini n. tribe, Macrotristriini n. tribe, Malagasiini n. tribe, Nelcyndanini n. tribe, Pagi- phorini n. tribe, Pictilini n. tribe, Psaltodini n. tribe, and Selymbriini n. tribe). Tribe Tacuini n. syn. is synonymized with Cryptotympanini, and Tryellina n. syn. is synonymized with an expanded Tribe Lamotialnini. Tribe Hyantiini n. syn. is synonymized with Fidicinini. Tribe Sinosenini is transferred to Cicadinae from Cicadettinae, Cicadatrini is moved to Ci- cadettinae from Cicadinae, and Ydiellini and Tettigomyiini are transferred to Tettigomyiinae n. stat from Cicadettinae. While the subfamily Cicadinae, historically defined by the presence of timbal covers, is weakly supported in the molecular tree, high taxonomic rank is not supported for several earlier clades based on unique morphology associated with sound production.

In a nutshell: the fungus infects males and causes them to exactly mimic the mating behavior of female cicadas, thus infected males end up spreading the fungus to uninfected males.

Male periodical cicadas (Magicicada spp.) infected with conidiospore-producing (“Stage I”) infections of the entomopathogenic fungus Massospora cicadina exhibit precisely timed wing-flick signaling behavior normally seen only in sexually receptive female cicadas. Male wing-flicks attract copulation attempts from conspecific males in the chorus; close contact apparently spreads the infective conidiospores. In contrast, males with “Stage II” infections that produce resting spores that wait for the next cicada generation do not produce female-specific signals. We propose that these complex fungus-induced behavioral changes, which resemble apparently independently derived changes in other cicada-Massospora systems, represent a fungus “extended phenotype” that hijacks cicadas, turning them into vehicles for fungus transmission at the expense of the cicadas’ own interests.

And now, because I need an image for the post: a meme:

Cicadas, when infected, are called “salt shakers of doom”. Add that to the meme “Salt Bae”, and the image makes sense.

A photo of a Cicadettana calliope calliope:

Zootaxa page for the paper.

The generic classification of cicadas within the globally distributed tribe Cicadettini (Hemiptera: Cicadidae) has been challenging due to their often conservative morphology. A recent molecular analysis has indicated that the six North American taxa currently classified in Cicadetta are unrelated to the European type species of Cicadetta, C. montana Scopoli. Here we identify a set of diagnostic morphological characters for a new genus, which we distinguish from its closest relatives in Eurasia and Australasia.

A new subspecies of the Similar Dog-Day Cicada has been described in the paper A new Neotibicen cicada subspecies (Hemiptera: Cicadidae) from the southeastern USA forms hybrid zones with a widespread relative despite a divergent male calling song by David C. Marshall and Kathy B. R. Hill (Zootaxa, Vol 4272, No 4). The cicada is named Neotibicen similaris apalachicola.

This cicada lives in Florida, Georgia & Alabama, and hybridizes with the other Similar Dog-Day Cicada sub-speces, Neotibicen similaris similaris. The document is available on biotaxa.org.

A morphologically cryptic subspecies of Neotibicen similaris (Smith and Grossbeck) is described from forests of the Apalachicola region of the southeastern United States. Although the new form exhibits a highly distinctive male calling song, it hybridizes extensively where it meets populations of the nominate subspecies in parapatry, by which it is nearly surrounded. This is the first reported example of hybridization between North American nonperiodical cicadas. Acoustic and morphological characters are added to the original description of the nominate subspecies, and illustrations of complex hybrid song phenotypes are presented. The biogeography of N. similaris is discussed in light of historical changes in forest composition on the southeastern Coastal Plain.

You will find song samples and maps on the Insect Singers website.

I think this is an image of the new cicada:

Update (9/20): I guessed the species correctly: all the Large Flute Players.

Last night I had a rough night’s sleep. I tossed and turned all night long. I remember looking at the clock and seeing 4 am, and thinking “tomorrow is ruined”. Sometime during the night I dreamt of finding thousands of molted Neotibicen exuvia clinging to shrubbery — a rare if not impossible sight in real life.

When I woke I checked my email and found a communication from David Marshall. David is well known and respected in the cicada world for many things including describing the 7th species of Magicicada with John Cooley, as well as being part of the team who defined the Neotibicen and Hadoa genera (link to paper)1.

So, what is MEGATIBICEN? Assumptions after the abstract.

Here is the abstract:

The genus Tibicen has had a confusing history (see summary in Boulard and Puissant 2014; Marshall and Hill 2014; Sanborn 2014). Boulard and his colleague (Boulard 1984; 1988; 1997; 2001; 2003; Boulard and Puissant 2013; 2014; 2015) have argued for the suppression of Tibicen and the taxa derivatived from it in favor of Lyristes Horváth. Boulard’s argument for suppression was first described in Melville and Sims (1984) who presented the case for suppression to the International Commission on Zoological Nomenclature with further comments made by Hamilton (1985), Boulard (1985), and Lauterer (1985). A lack of action resulted in additional comments being published in 2014 again supporting the retention (Sanborn 2014; Marshall and Hill 2014) or the suppression (Boulard and Puissant 2014) of Tibicen.

My guess, without reading the document, is that Megatibicen includes the larger North America Neotibicen species, including the “auletes group” (M. auletes, M. resh, M. figuratus, M. resonans), the “pronotalis group” (M. pronotalis, M. dealbatus, M. cultriformis) and the “dorsatus group” (M. dorsatus, M. tremulus), or a mix of these. M. auletes is the largest cicada in North America. “Mega” is the Greek word for “very large” or “great”. Word is that Kathy Hill and David Marshall also planned on describing a Megatibicen genus at one point, as well.

Whenever cicada names change it causes feelings of bemusement, discontentment, and discomfort amongst some cicada researchers and fans. I know I don’t like it because I have to update the names of cicadas in 100’s of places on this website ;). Some folks simply disagree with the folks writing the paper. Some people prefer former names because they sound nicer (e.g. N. chloromerus vs N. tibicen tibicen). Some people simply do not like change.

Related: Here’s my article on when Neotibicen & Hadoa were established from Tibicen.

1 Hill, et al. Molecular phylogenetics, diversification, and systematics of Tibicen Latreille 1825 and allied cicadas of the tribe Cryptotympanini, with three new genera and emphasis on species from the USA and Canada (Hemiptera: Auchenorrhyncha: Cicadidae) 2015, Zootaxa 3985 (2): 219–251.

There isn’t a lot of New Zealand cicada information on this website, but I wanted to point you to a few good resources if you are interested:

First, there’s the NEW ZEALAND CICADAS (HEMIPTERA: CICADIDAE): A VIRTUAL IDENTIFICATION GUIDE which features photographs and extensive information about the cicadas of New Zealand. The site has an abundance of information, and a wonderful design & layout.

Third, iNaturalist is an excellent place to discover information about cicadas, and report sightings.

I asked David Marshall of InsectSingers.com, “when does New Zealand cicada season start and end?” His answer essentially is that it depends on the location, elevation, and species, but the best months are between December and April. Interestingly, in certain locations K. muta sing every month of the year. 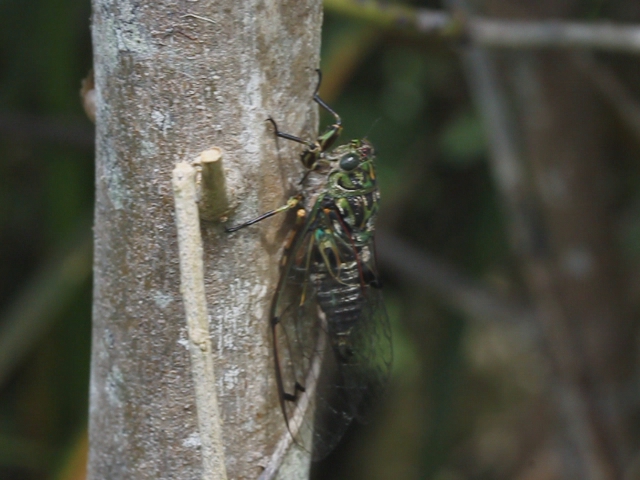 Major Changes to the Tibicen genera

Sometimes you wake up and the whole world is different. See this cicada:

The second paper is Molecular phylogenetics, diversification, and systematics of Tibicen Latreille 1825 and allied cicadas of the tribe Cryptotympanini, with three new genera and emphasis on species from the USA and Canada (Hemiptera: Auchenorrhyncha: Cicadidae) by Kathy B. R. Hill, David C. Marshall, Maxwell S. Moulds & Chris Simon. 2015, Zootaxa 3985 (2): 219–251. This paper establishes the Neotibicen (Hill and Moulds), and Hadoa (Moulds) genera. This paper also sought to establish the Subsolanus genera for the Asian Tibicen/Lyristes species but the previously mentioned paper by Young June Lee has precedence because it was published first. Link to paper.

To recap, European Tibicen/Lyristes are Tibicen…

Needless to say this website and others have a lot of name changing to do, but in the mean time, here’s where the North American species fall out:

If you’re interested in North American cicada species, and you’re looking for sound files of those cicada’s songs, check out Insect Singers, a new website from cicada researchers David Marshall and Kathy Hill. It has dozens of audio samples. Awesome!